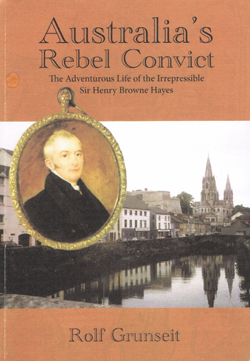 Son of Atwell Hayes and Mary Catherine Browne, Henry was the eldest of eight siblings. His father was a successful Cork merchant with interests in brewing, milling and glass-making. He was born in 1762 and the name Browne was included in his surname to prevent the Browne name from dying out, there being no males to carry it on. Henry has been described as an eccentric “buck”, with a short temper, rebellious and greedy, and prone to settling disputes with his fists.

By the age of twenty one, he had fathered three illegitimate children by separate mothers. In 1783 he married Elizabeth Grice Smyth in the Church of St. Mary’s and All Saints in Glanmire. Elizabeth was a daughter of one of the landed gentry family who had built the imposing neo-classical mansion, Ballynatray, in landscaped grounds overlooking the Blackwater estuary in west Waterford. It is believed that Elizabeth bore Henry four children, before she died in 1794.

In 1790 he was elected as a Sheriff of Cork City. In the same year he wangled a knighthood from the Lord Lieutenant John Fane, 10th Earl of Westmoreland, on what could only be described as tenuous grounds, namely the lavish hosting of the latter on the occasion of his visit to the city. It is around this time that it is thought that Henry and his family moved into Vernon Mount House.

In 1793 Sir Henry was commissioned as lieutenant in the South Cork Militia, rapidly rising to the rank of Captain before being court martialled and dishonourably discharged for striking his commanding officer Lord Doneraile. By now he had spent his wife’s dowry and inheritance on lavish furnishings and decorations, as well as extravagant living and gambling. and following her death found himself heavily in debt. He turned to his father Atwell for financial assistance, and when refused he placed an advertisement in The Cork Courier of 10th December 1794 announcing that Vernon Mount was to be let along with 160 acres, even though he was only the lessee of the property. This served to embarrass Atwell into rescuing his son from his financial difficulties.