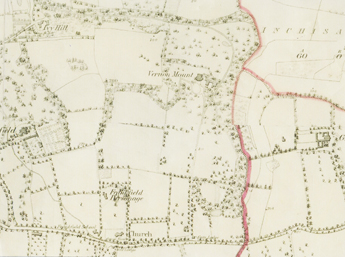 Seen in the 1st Edition Ordnance Survey maps 1840 (in both black and white and in colour) of the Douglas area to the south-east of Cork city, the rural environs of Vernon Mount and its 158 acres demesne had changed little since the house was built some 50 years earlier. Occupying a prominent position on the hill overlooking the city, it shares this privileged status with other substantial houses of the period to the east and west. These villas or ‘Big Houses’ were built on the outskirts of Cork city in the late 18th or early 19th century and provided spacious accommodation for the business elite of the day, the city's merchant princes, and had landscaped grounds and gardens. Many of these residences did not survive the vicissitudes of the 20th century, eventually falling into decay or before the developer’s hammer. A similar story could be told about the hillsides to the east of the industrial village of Douglas and indeed of the hillsides to the north east and north west of the city. Nonetheless some fine neo-classical mansions still survive – enough to give a taste of what the period provided.

In the flat bottomed valley to the north of Vernon Mount the map shows the extensive marsh that followed the meandering course of the Tramore River as it headed east towards Douglas village, and beyond into the upper reaches of Cork Harbour. A closer look at Vernon Mount’s demesne reveals the existence of two access driveways, one from the former Kinsale road to the north east that winds its way up to the house, and one more directly from the Grange Road to the south where a gate lodge is situated. From the map it appears that much of the demesne was laid out in an informal, ‘Capability Brown’, style landscape with open fields, groves of trees, and woodland belts in the narrow valley to the west of the demesne. Unlike other demesnes in the area there appears to be no formal planted gardens or walled kitchen garden enclosures. There were, however, greenhouses clustered to the north of the gate lodge. A circular, coach-turning, area fronted the entrance to the house on its southern façade.

Walks permeate the woodland and along the stream that flows through the narrow valley, presumably intended for leisure. A number of small artificial ponds also grace this area and what could have been a summer-house or ‘folly’ near one of them.
Extending north to reach the Tramore River the demesne incorporates wetland and marsh with what looks like drainage channels cut to drain the lands.

In looking at the current cartographic and aerial photo-mapping of the same area, the colossal change wrought by modern infrastructural needs – notably the national route running east west along the bottom of the escarpment, and to its north the extensive area taken up by sanitary land-filling by the city authority is immediately apparent. Re-routing of the Tramore River further south of its original course was necessary to accommodate the expanding landfill. Now closed, the landfill is in the process of being converted into a substantial public park. Suburban development consisting largely of housing and ancillary uses surrounds the truncated curtilage of the house to the south, east and west and a moto-cross cycle course scars its immediate environs. Only the wooded narrow valley has survived to any great extent.